When a woman experiences uterine rupture during labor or delivery, it could kill or seriously injure the baby and the mother. If you or a loved one has suffered this type of serious injury during labor, it may be in your best interest to get more information about your legal rights and options. You may have a potential medical malpractice claim if the doctor or healthcare provider:

Hospitals and medical providers who have caused harm to patients through an act of malpractice can be held accountable for damages that the patient and the baby suffer as a result, including medical bills, future medical and rehabilitation costs, lost wages, pain and suffering, and other related damages.

Signs of uterine rupture include:

Uterine rupture can cause birth asphyxia, hypoxic-ischemic encephalopathy and cerebral palsy. Uterine rupture disrupts the flow of blood to the baby. The blood contains the oxygen that is necessary for the baby’s brain and other vital organs. When uterine rupture deprives the baby of blood and oxygen, the baby develops asphyxia. The asphyxia damages the brain cells and tissues and results in hypoxic-ischemic encephalopathy which is a brain injury cause by lack of blood and oxygen. That brain injury affects the parts of the baby’s brain that control movement, posture, cognition or thinking. As the child grows, the brain injury that happened because of the uterine rupture manifests with abnormal movements which are diagnosed as cerebral palsy.

Our birth injury attorneys have experience with uterine rupture cases. We represented a young boy whose mother suffered a uterine rupture. The umbilical cord protruded through the rupture and was compressed causing the boy to suffer asphyxia, hypoxic-ischemic encephalopathy and cerebral palsy. 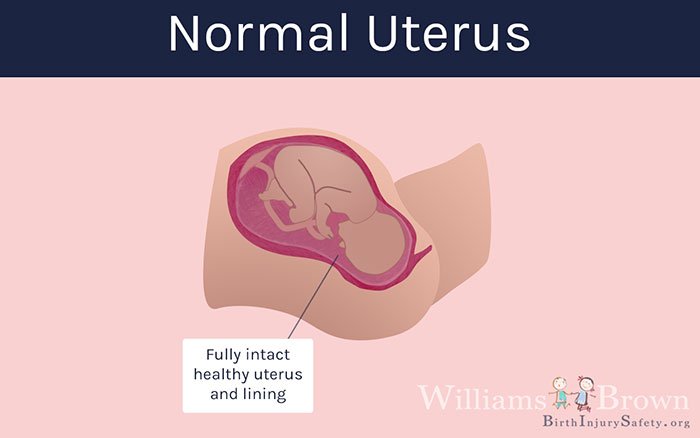 Picture of a normal, fully intact, healthy uterus and lining

What is Uterine Rupture?

Uterine rupture can also cause that baby to be extruded or forced out of the mother’s uterus into the mother’s abdominal cavity. If the uterus tears or ruptures, the baby can be deprived of blood flow from the mother (ischemia) or deprived of oxygen (hypoxia), which can lead to birth asphyxia, hypoxic-ischemic encephalopathy (HIE) and, later, cerebral palsy. Uterine rupture is a medical emergency and may require an immediate Cesarean section delivery to protect the baby and the mother.

Delays in cesarean section (c-section) delivery when there has been a uterine rupture can result in serious injury or death.

A mother who has previously had a Cesarean section has a scar on her uterus from the incision. A scarred uterus is weaker and, therefore, there is a risk that the scarred uterus could tear open during labor allowing the baby, the placenta, or the umbilical cord to stick out or poke through the uterus into the abdominal cavity. 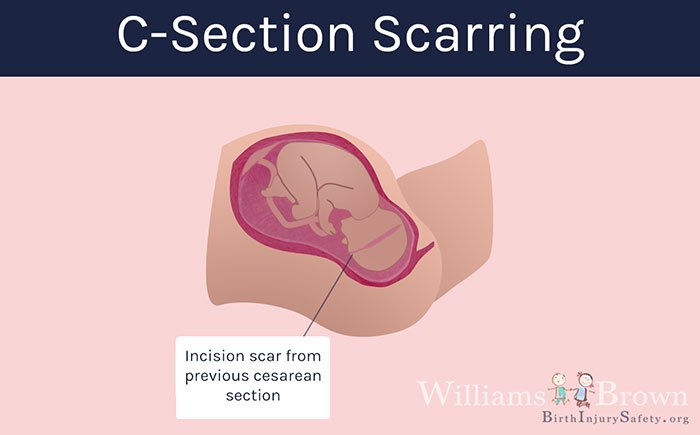 Picture of an incision scar from previous Cesarean section

The umbilical cord can be compressed which disrupts the flow of blood and oxygen to the baby. If the placenta is damaged and/or the uterus is damage, those physical injuries can also disrupt the flow of blood and oxygen. This is a type of birth trauma that can result in lack of blood flow and lack of oxygen to the baby causing birth asphyxia, brain injury caused by lack of oxygen (hypoxic-ischemic encephalopathy) and ultimately cerebral palsy.

Hospitals, doctors, and nurses must be aware of the dangers that a VBAC delivery poses to the mother and her child, including the potential for uterine rupture and injury to the baby.

When the mother’s uterus ruptures, an urgent or emergent cesarean (c-section) delivery may be necessary. The uterine rupture can cause significant blood loss which can put the lives of both the mother and the baby at risk. Surgery may be necessary to stop the bleeding and to deliver the baby so the baby can be oxygenated outside of the mother. Delays in recognizing a uterine rupture and delays in performing a cesarean section delivery can cause injury or death to the mother or the baby. 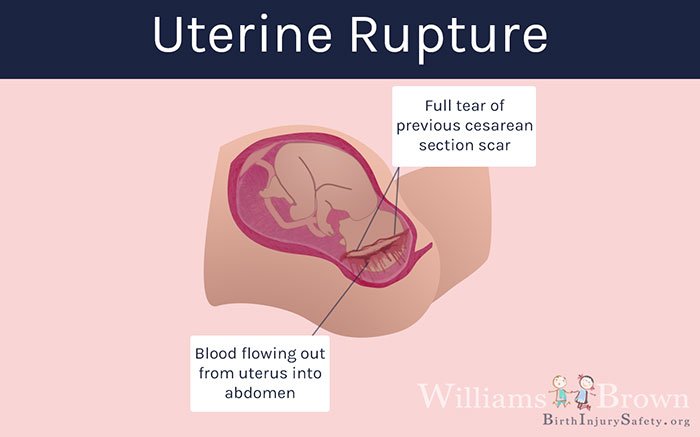 Picture of uterine rupture and c-section

Our birth injury attorneys represent clients in all types of cases including: